Crime on Black Friday and Cyber Monday – Violence, Fraud, Theft, and Other Legal Pitfalls to Avoid this Holiday Season 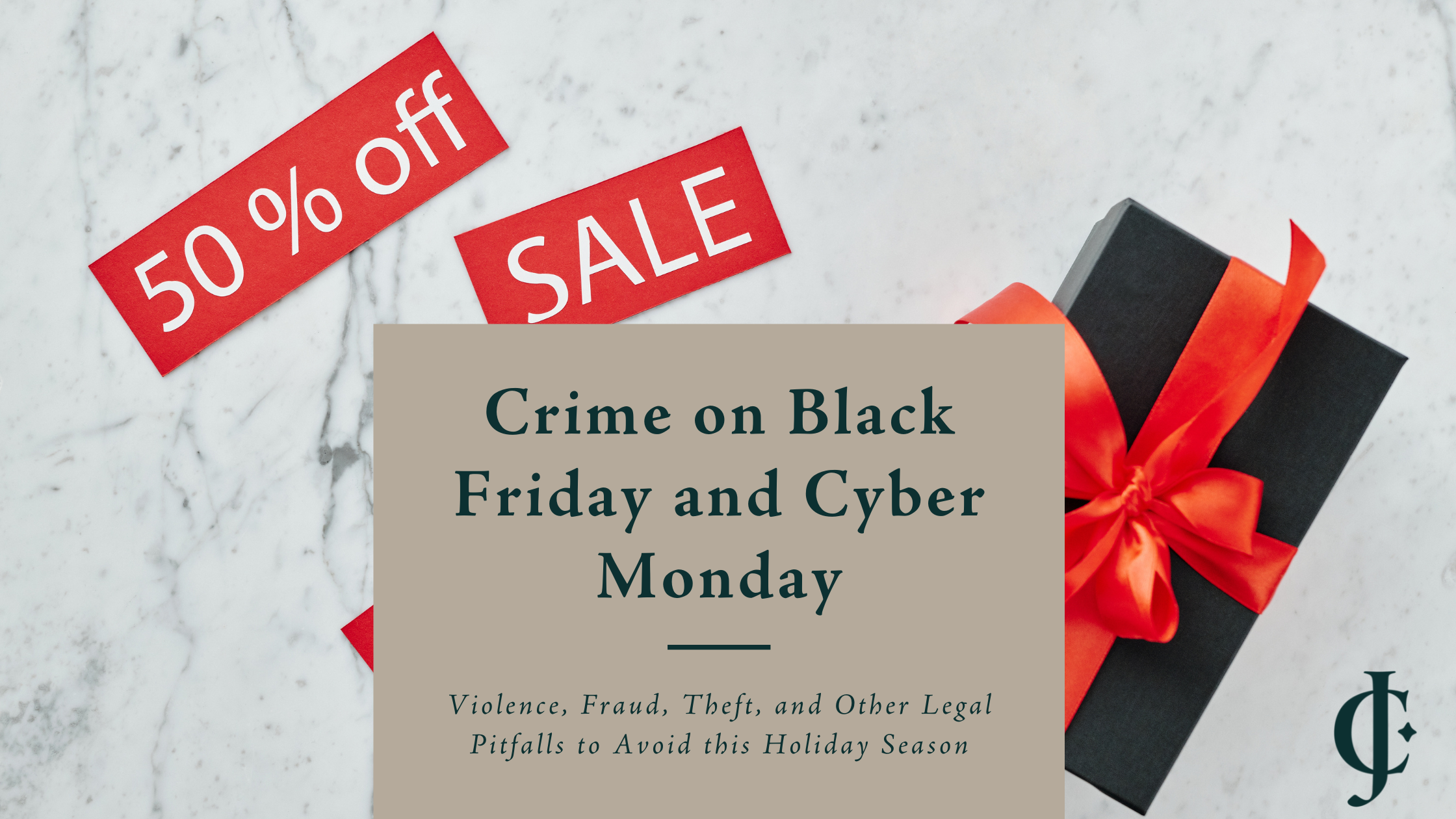 The holiday shopping season is upon us! With the time ticking until gift-giving kicks into full gear, the rush of special deal days like Black Friday and Cyber Monday has taken over: sending many out of their homes or to their computers to save some money on sought-after items. However, it isn’t uncommon to see a spike in crime around this time, and if you want to spend December with your family and not in your cell, you should read on to learn more about:

You may have had a pain-free Black Friday and saved on holiday gifts while having fun in the process: good for you! Nowadays, the chances of painful, dangerous, and deadly Black Fridays are low. The consumer landscape has drastically changed since the mid-2010s, with many turning to online deals and more flexible options. Once-price chopped, highly sought-after items like TVs and game systems now vary in prices from affordable to expensive or see sporadic limited releases. Holiday shopping is different today, but it doesn’t mean things don’t happen.

Fights over products are something seen across multiple tense consumer situations: from major sales to the COVID-19 paper towel panic. Sometimes getting to a certain product or deal first becomes a competition, which may turn violent. In Maryland, both battery and assault are considered synonymous, so even if you have an idea of what qualifies as battery in another state, you will still wind up with an assault charge here.

What is the legal definition of assault? In Maryland, assault is intentionally putting another person in reasonable apprehension or imminent offensive bodily contact without their consent, or actually making that offensive bodily contact without their consent. Of course, there are levels of assault that vary depending on the severity of an act; even though your crimes may be considered battery in one state, it may constitute second-degree assault in Maryland.

Second to any physical violence, varying levels of theft may occur around Black Friday. It is not uncommon for people to seize on the craze of a busy day in a big box store and sneak out small items. Just because something seems easy to get away with doesn’t mean you should do it. Even with just a couple hundred dollars’ worth of stolen goods, you could face some severe penalties if caught.

Like any crime involving money, Maryland law defines theft penalties as they correspond to the amount stolen. For example:

Theft of property valued under $100 is considered misdemeanor and carries up to 3 months in jail, a $500 fine, and repayment of the full price stolen;

So do not take theft charges lightly; they may spell negative consequences for your future.

As safe as Black Friday may be nowadays, a tense interaction with a fellow shopper may still occur. If it does, let cooler heads prevail. Violence is very easily avoided if you just disengage and wait for help from store workers or security.

Cyber Monday is a relatively new way for consumers to cash in on deals if they weren’t too keen on making an early shopping trip the day after Thanksgiving. Especially with the COVID-19 pandemic, the amount of people deferring to online shopping has skyrocketed over the past year. Unsurprisingly, online scams surged in this stage of this uptick in activity: causing average and unsuspecting people to lose a combined hundreds of millions of dollars.

Cyber scams come in all shapes and sizes. You’ve probably come face-to-face with some form of them in your lifetime. Ever get a text claiming your cell service provider owes you money for overpaying on your last bill? Classic “win big” emails that require you enter personal security information to reap the benefits of a sudden and unexpected fortune?

These types of scams, though obvious at times, do affect people. However, there are even more complex operations that see larger returns and widespread impact.

Fake online stores are a real thing: people who build a legitimate-looking site boasting flash sales on popular products looking to lure in unsuspecting buyers. The main focus of a scam like this is to gather as much credit card information as possible. Typically, the operator of the scam will use them to buy up gift cards or other expensive products.

This falls under the umbrella of credit card fraud, which the government takes very seriously. The same principle applies as it did with theft up above: different tiers for different levels of fraud. A misdemeanor charge usually constitutes under $1,500 stolen: this alone may land you in prison for a year, paying an equal amount of restitution. Felony charges cover amounts over $1,500, with potential charges of up to 20 years in prison and $25,000 in fines, not including restitution.

This is not to say you will only see one charge for one scam. You could see a list of charges for being a part of a scam, including identity fraud, larceny, mail fraud, racketeering, and so on (depending on the scam itself).

With the volatility of the holiday gift-buying season, these scams are not uncommon. However, though you may see statistics and numbers regarding mass losses by consumers, the government has advanced ways to track down and prosecute fraud cases. You do not want to be on the receiving end of these charges; you’ll end up losing more money than you gained if found guilty.

Getting Legal Help and Avoiding Trouble This Holiday Season

No matter how Black Friday or Cyber Monday impacts you, it is best to stay out of trouble for the holidays. It is not worth risking spending time with the family and instead in a jail cell.

However, if you are charged with a crime you did not commit, got in a scuffle where you acted in self-defense, or have the federal government knocking at your door, call us to get an expert criminal defense. We understand and know this is a special time of the year for everyone, and we want you to be able to spend it in a way that works best for you.

Contact our offices for a free initial consultation if you need a criminal defense attorney’s help to get out of a tight legal situation!