What Is a Protective Order? – Stay Safe from Certain Harm 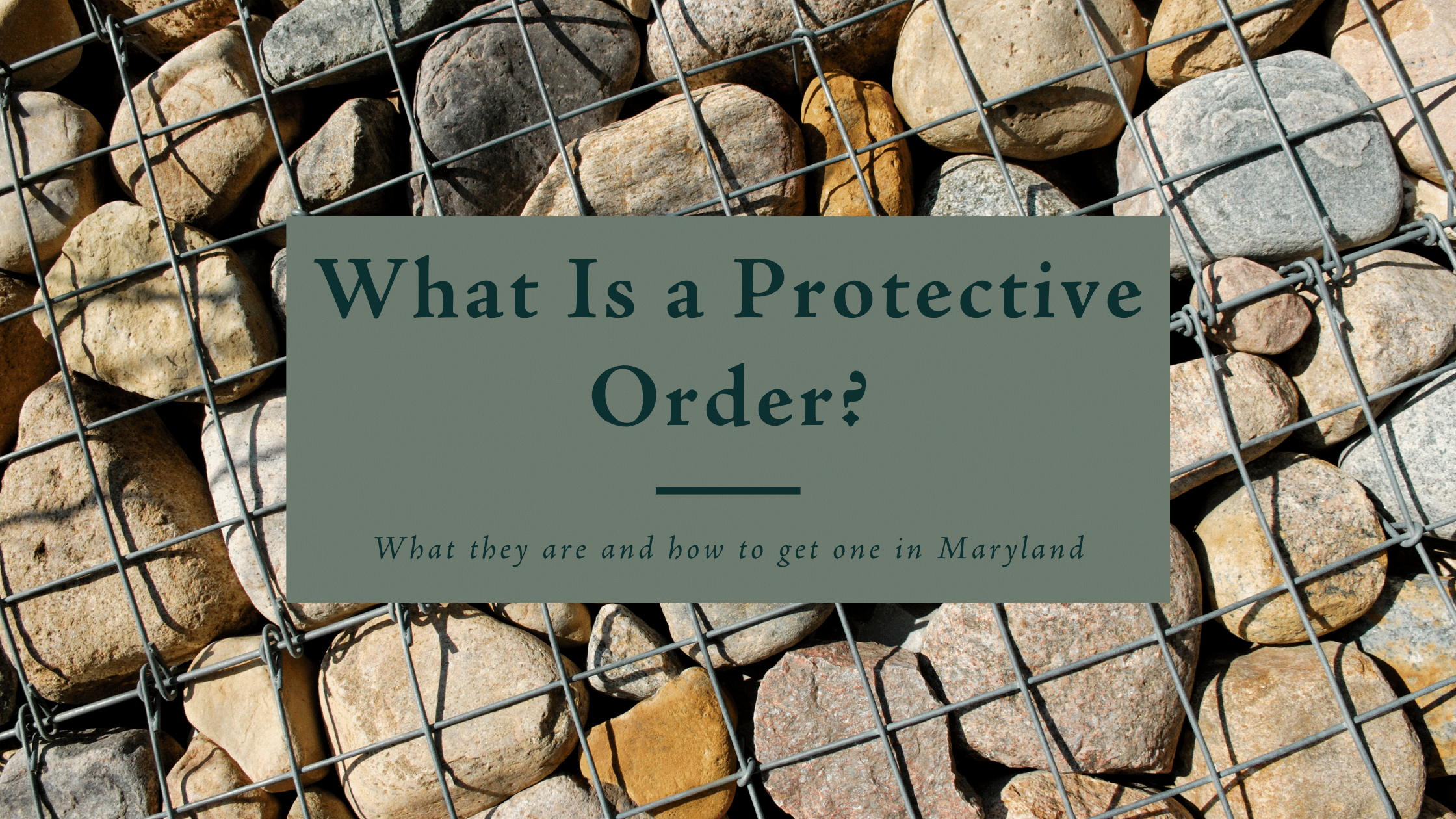 Why is it always the ones we love who hurt us most? The saying might be cliché, but for some Marylanders, it’s a downright nightmare-ish scenario. When someone close to you wants to physically hurt or abuse you, it’s time to seek out legal protection: A protective order.

What Is a Protective Order?

In Maryland, a protective order is special court order that states one person must stay a certain distance away from another and they must not commit certain acts against another. If you’re an out-of-stater or watch a lot of crime shows, you may know the order better as a “restraining order” or a “stay-away order.”

What Are the Different Types of Protective Order?

Temporary protective orders are issued at the beginning of the case. These orders protect petitioners from abuse, threats, and harassment by ordering the accused party to have no contact, stay away from the others home, work, or school. It also orders them out of any shared residences.

The temporary protective order may also include conditions establishing:

Protections granted by a temporary protective order are, well, temporary. However, the order usually lasts until the final hearing of the case.

During that hearing, if the court decides that there is reason for a longer protection, they will issue a more permanent protective order.

A “final” protective order is issued after both the accused and the accuser present evidence to a Maryland court to either defend against or justify further legal protection.

These final protective orders are as “permanent” as legally permissible – up to a full year after the hearing. The victim may then petition the court for an extension of the protective order, if they can prove that additional time is needed.

How Can You Get a Protective Order?

If someone claims they or their children are victims of domestic abuse, then Maryland courts do not mess around.

To begin the process, a protective order applicant would need:

Once these are completed, the applicant must talk to a court representative – a Maryland court commissioner – to make their case.

Getting an “Emergency” or Temporary Protective Order

The commissioner will hear the case and decide on the protective order based on evidence presented by the applicant.

No “he said, she said” circumstantial evidence will result in even a temporary order of protection, though. Only evidence that shows signs of abuse will be accepted by the commissioner, including but not limited to:

After hearing testimony and examining the initial evidence, a commissioner will grant an interim protective order – basically, the emergency protective order that errs on the side of caution before the opposing party can present evidence.

Once the commissioner grants the protective order, law enforcement will immediately serve – “deliver” – the order of protection to the accused. They’ll explain what can and cannot be done during the interim protective order, and when the next hearings are held.

These initial protections stand for two business days, or until a temporary protective order hearing is held.

During this second hearing for an actual temporary protective order, the accuser must provide proof of the abuse the accused inflicted once again.

Depending on the circumstances, a judge may order additional protections, such as no contact orders we referenced earlier.

In Maryland protective orders, a “no contact” directive means absolutely no contact of any kind – phone calls, texts, video calls, stopping by the residence, singing telegrams, whatever – can be exchanged or attempted between both parties while the protective order is active.

Getting a Final or “Permanent” Protective Order

At this “final” protective order hearing, a couple of things can happen.

At the end of this hearing, a judge might issue a final or “permanent” protective order if the applicant has offered compelling enough evidence.

This final protective order can have the same or different protections as the temporary order, but those protections only last for a year. The applicant can request an extension of the order at that time, given evidence that the order is still required.

Both parties will receive a copy of the final protective order at the conclusion of the hearing.

Getting Mutual Orders of Protection – The Bonus Protective Order!

If a judge finds that both parties – the accuser and the accused – were violent and abusive towards each other without a clear aggressor and victim, then they may order what’s called “Mutual Orders of Protection.”

A mutual order of protection means that both parties are prohibited from abusing, harassing, or interfering with the privacy or rights of each other. These mutual orders could also extend no-contact orders between the parties.

(It’s almost like everyone gets sent to a legal “time-out”, though clearly with much more serious ramifications for those involved.)

What Happens If You Break a Protective Order?

In Maryland, any violation of the protective order is considered a criminal offense.

The state or the other party may file charges if contact, harassment, or abuse continues despite the court’s protective order.

Sometimes, the court or the other party may argue that getting a mutual friend or family member to pass along a message doesn’t count as breaking the no-contact order. However, that’s an extremely tricky line to walk, particularly without legal counsel to guide you.

If communication is absolutely required, then consider talking through legal counsel to ensure that no one breaks the protective order, whether temporary or final. (It can help take some of the emotion out of communication, too, which can only help a volatile situation.)

Look, Maryland law is set up to stop a bad situation from getting worse. Victims of domestic violence can benefit from this “better safe than sorry” sort of approach.

However, people who might not be abusive may suddenly find themselves getting served with a temporary restraining order out of the blue, without an opportunity to talk through the problem with the opposing party.

That’s why the temporary order exists only for a week or two: So that the accused can have a fair shot to defend themselves in a court of law, while the accuser has safety and breathing room.

No matter whether you need to apply for or defend against a protective order, JC Law stands with our clients to get them the protections – and the safety, the normalcy – they deserve. If you need help, you can call anytime. Or, schedule a consultation at your convenience! We’re here to serve you.