Child Abuse Charges: What Does It Legally Mean in Maryland? 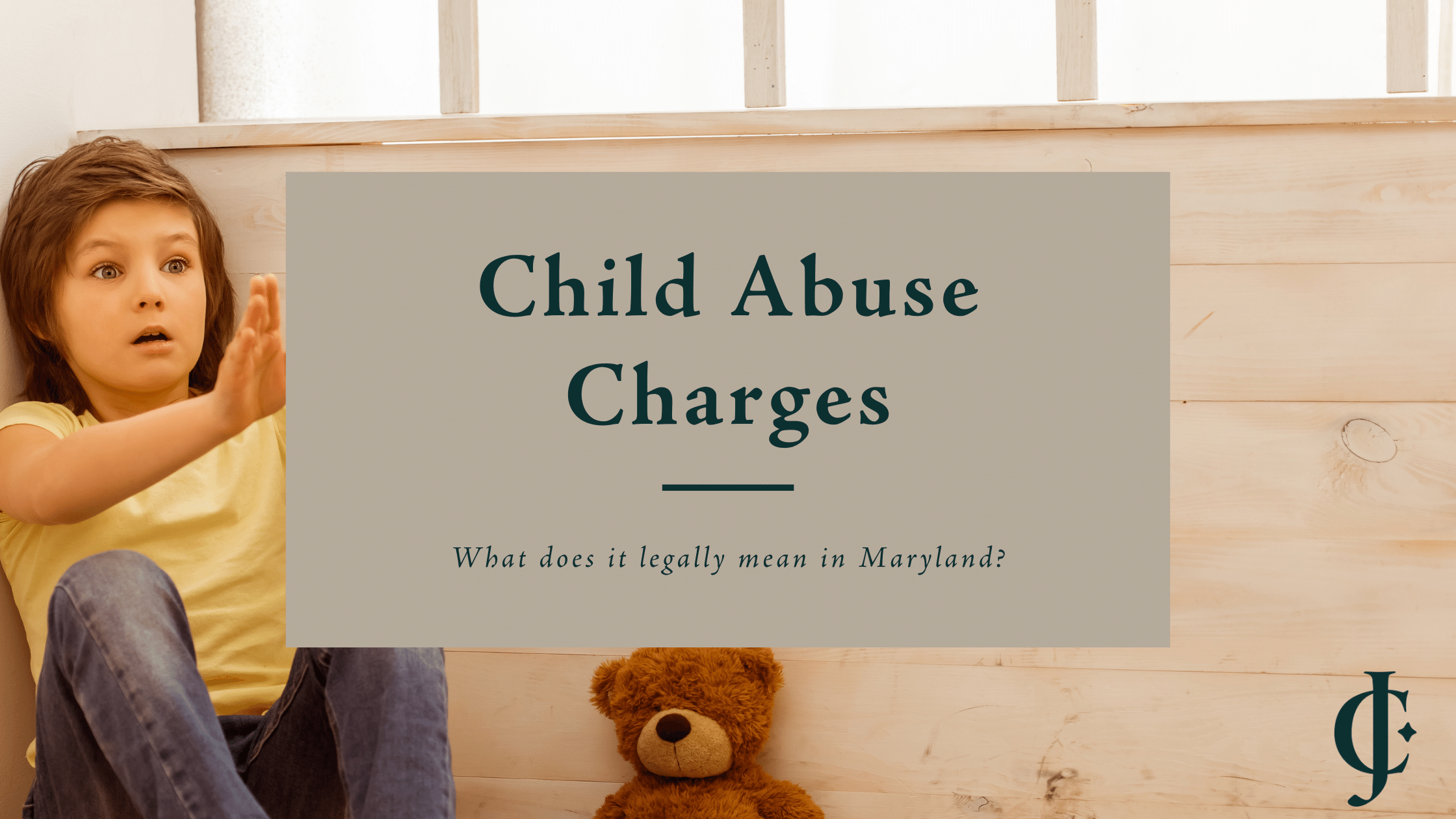 Maryland does not take accusations of abuse or neglect lightly, especially when it comes to protecting its most vulnerable citizens: Children.

Maryland’s child abuse codes and laws try to protect children from harm while avoiding false accusations. While the intent may be good, the laws don’t always successfully strike that balance. Learn:

What Does Maryland Define As Child Abuse?

…physical injury sustained by a minor as a result of cruel or inhumane treatment and injury as the result of a malicious act under circumstances that indicate the child’s health or welfare was in harm or threatened by result of the act.

In other words, a parent or guardian must intentionally harm the child for it to qualify as “child abuse.”

Physical child abuse covers any “non-accidental” injury to a child inflicted by a parent or guardian.

Incidents that may fall under physical child abuse include bruises, scrapes, cuts, and even fractures caused by hitting, kicking, throwing, or use of an object.

To commit emotional child abuse under Maryland law, the parent or guardian must have intentionally communicated in such a way to the child as to make them feel worthless, flawed, unloved, unwanted, or endangered.

This type of abuse can range from minor insults to extreme punishment. Emotional abuse is almost always present when another form of abuse is found.

Sexual abuse of a child legally occurs from just about any intended sexual contact or sexual behavior with or around a child, or otherwise attempting to sexually exploit them.

Roughly 90% of child sex abuse cases are committed by a family member or close family friend.

Legal neglect of a child – also sometimes known as “abuse through omission” – is considered a type of child abuse under Maryland law.

Neglect occurs when a parent or guardian establishes a pattern of intentionally failing to provide for a child’s basic needs such as food, water, shelter, and healthcare.

So, letting a child go hungry for a night if they won’t eat their supper politely would probably not qualify as child abuse through neglect. However, systematically not feeding your child altogether might count as neglect, when combined with other factors.

Legal neglect can be further broken down into four main categories.

What Are the Different “Degrees” of Child Abuse and Types of Penalties?

Both are serious charges, and convictions carry substantial fines and prison time.

Child neglect and sexual abuse of a minor are related charges that bring their own set of punishments into play.

Parents, family members, guardians or household members can be charged with second-degree child abuse when prosecutors believe that they treated the child cruelly or inhumanely on purpose, thereby harming or threatening to harm the child’s welfare.

Punishment for second-degree child abuse is a criminal misdemeanor sentence of up to 5 years in prison and a maximum fine of $10,000 for each violation.

When those same authority figures abuse a child to the point their actions result in the child’s death or severe injury, then first-degree child abuse charges may be filed.

(Maryland law defines “severe injury” as starvation, concussions, disfigurement, and loss of function of part of the body.)

Additional Child Abuse Charges: Neglect of a Minor and Sexual Abuse of a Minor

Neglect charges can result in a felony conviction that carries a maximum sentence of up to 15 years in prison.

Sexual abuse of a minor charges are brought when sexual misconduct occurs with a child, but was committed by that child’s guardian or other authority figure – not a complete stranger.

This abuse can be rape, sodomy, incest, or “unnatural or perverted sexual practices.”

Sexual abuse of a minor convictions are considered felonies with sentences of up to 25 years in prison.

How to Fight Against Child Abuse Accusations

The law is fuzzy enough – and parenting styles vary enough – that simple misunderstandings can result in child abuse charges landing on your doorstep.

For example, in Maryland, any perceived abuse against a child must be reported to authorities. It’s not just “mandated reporters” such as healthcare workers or teachers anymore, either. As of October 2019, the Maryland legislature required that every Marylander must report abuse.

Any failure to report is considered a crime; conviction could result in $10,000 fine and/or 5 years in prison.

Therefore, people may err on the side of caution “just in case” a certain behavior or activity could be considered abuse, without considering the ramifications to the family or greater community.

No proof of the abuse is required from the reporter; however, evidence will be needed to show your innocence.

Let’s say your child got hit by a ball in gym class, resulting in a nice shiner.

Your neighbor doesn’t know about the accident, but can see the black eye. They can report possible physical child abuse to the authorities.

To prove that the injury did not come from abuse, you’d need evidence – such as the school nurse’s report of the injury – to show it was an accident, not intentional.

Abuse accusations can also be levied during intense legal negotiations, too, such as custody or divorce trials.

For example, a disagreement over the medical care of a child could cause an accusation of child abuse and an investigation into the allegation. The accused will need to have medical documents showing proper care for the child to end the investigation.

Remember: Even if you are innocent, you will have to fight for your fair and legal day in court. A great criminal defense attorney can discover ulterior motives or false claims, showing the court your side of the story.

No one should have their families, lives, and reputations ruined due to a bad accusation of child abuse. Schedule a free 15-minute consultation to learn how JC Law can protect yourself and your loved ones from child abuse allegations.