What Are Sex Crimes? – List of 8 Common Offenses and Possible Defenses 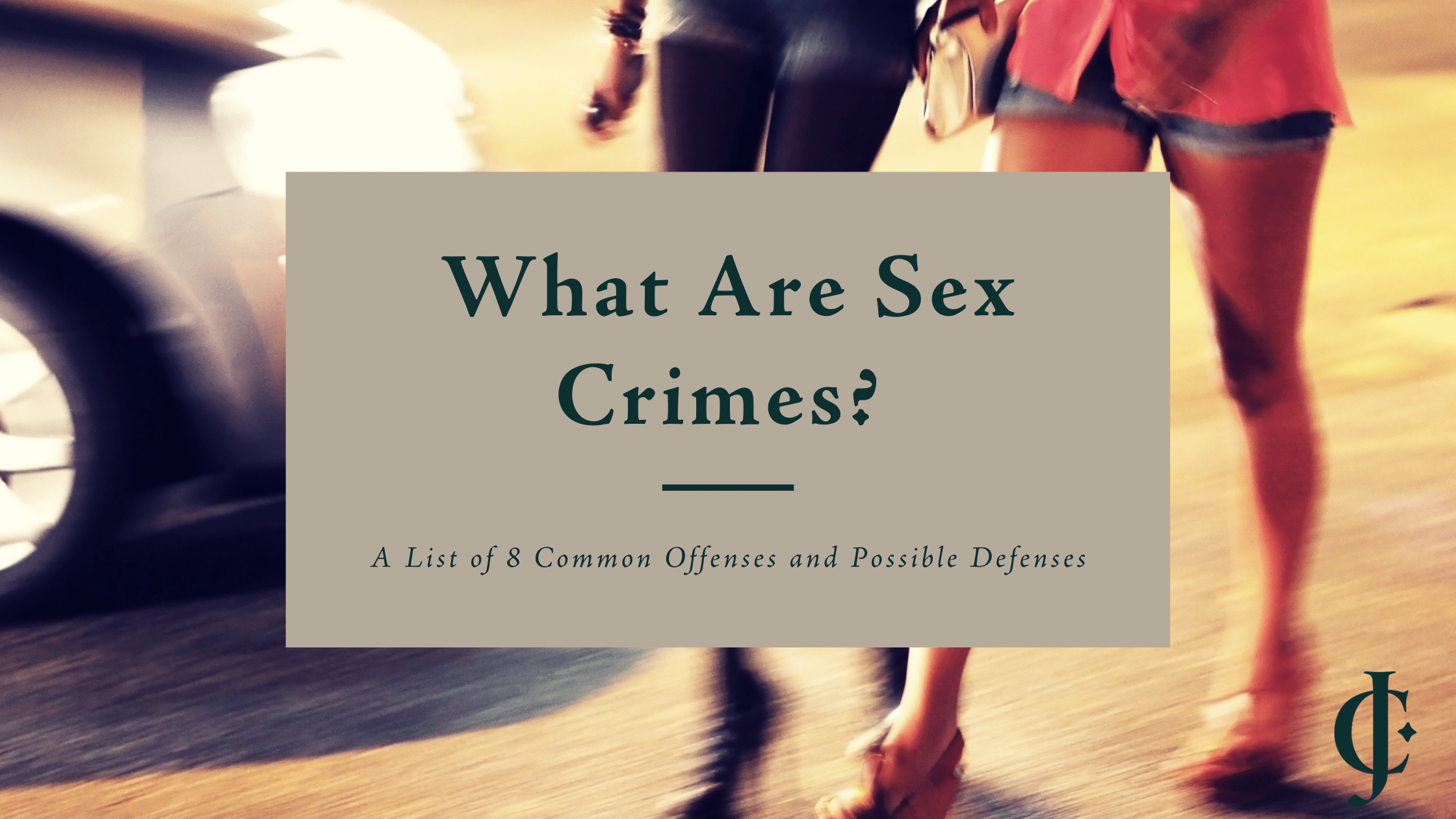 Crime involving a sexual element in Maryland falls into its own category of offenses. Society and the courts judge a sex crime harshly, so don’t let accusations spiral out of control to ruin your life.

Basically, sex crimes are criminal offenses that happen during sex or a sexual act. These offenses can occur with violence, and consent and mental capacity factor in, too.

Both parties must consent to sex. When one party does not, allegations of sex crimes occur.

Anyone deemed mentally handicapped or who is legally a child cannot consent to sex. That’s why sex acts with either group – including those possessing or creating child pornography – are criminalized.

A sex crime can also include any actual harm or threats during the sexual activity, as well as mental and emotional harm from a sex act.

For example, public indecency goes on record as a sex crime. It involves inappropriate sexual behavior and possible harm to the public.

For example, a flasher surprising a random individual off the street might face sex crime charges if that individual experienced “mental anguish.”

From the mundane to severe, all sex crimes are no joke in the legal system. Allegations alone have serious repercussions from employment and housing, all the way to something small as social life.

Convictions of sex crimes lead to registration on the sex offender list, significant fines, and even prison time.

All of that said – what specific offenses qualify as sex crimes under Maryland law?

All accusations of a crime involving a sexual nature are serious charges in Maryland. Most sex crime offenses are felonies. Here are eight common criminal offenses that Maryland describes as sex crimes.

Sexual intercourse with an unwilling participant or someone who is unable to consent. Usually under threat of violence. Two types of charges, first or second-degree rape.

First-degree charges come when any person who uses extreme measures. Force by death threat or other injury. Includes all genders.

This category is vaguer than others, as it covers a broad range of acts that are sexual in nature. Generally defined, sex offenses or sexual misconduct charges are a type of sexual violence involving abuse of power, control, or intimidation.

In general terms, sodomy is non-procreative sexual activity through physical harm or threat of harm. Any sex act that is not considered heterosexual falls into this category.

Incest charges involve those engaged in sexual activity with a person that is a direct family relative. This charge covers children as well as adults.

Maryland defines solicitation as attempting to buy or buying sex or sexual favors from another individual, who would be committing the crime of prostitution to sell said favors.

(Prostitution and solicitation are only legal in Nevada; outlawed in the other 49 states.)

Child pornography is a criminal form of child sexual exploitation. “CP” can consist of pictures or video of sexually explicit conduct with a minor, which is anyone under the age of 16 in Maryland.

Molestation of a minor includes “wrongful” or offensive sexual contact with a minor. Includes rape, incest, or any degree of sex offense involving a child under age 18.

Kidnapping becomes a sex crime when it involves human trafficking. Human trafficking can be legally defined as forcing, tricking, or intimidating another person into sexual service. It’s a form of modern-day slavery, as victims can be bought or sold for sexual services.

Remember, allegations are not convictions. Those accused of sex crimes should be considered innocent until proven guilty in a court of law – not the court of public opinion.

Therefore, sex crime accusations need to be met head-on. A seasoned criminal defense attorney starts the defense even before charges are filed against the accused, defending a client during an intense investigation period.

How a case gets defended all depends on the circumstances.  No two cases are alike.

That said, here are some ways a criminal defense attorney could defend a sex crime charge.

The most basic of defenses, this defense involves proving the accused could not possibly commit the crime through a provable alibi.

For example, if the defendant was in Baltimore at 3:20pm and the accuser states the sex crime occurred in Frederick at 3:05pm, the defendant could not have committed the act.

Of course, proof of the alibi needs to be provided, such as CCTV footage of the individual in Baltimore at the time of the Frederick crime.

This defense involves admitting the sex act did happen, but the accused consented to the behavior at the time.

Sex crimes are criminal because they allegedly occurred against the accuser’s will at the time of the incident, thereby harming them.

If the attorney can prove the act was consented to, then their client has a solid defense against the charge.

Insanity defenses mean proving to the court that the defendant has a mental defect or disease that consequently removes criminal liability.

A defendant with autism or paranoid schizophrenia may not understand their actions were criminal, and thus may be able to avoid criminal prosecution of those actions.

While this may be a valid defense in movies or presented once in a blue moon, this is an incredibly difficult defense to present. The defense lawyer must prove that the defendant was incapable of knowing their actions were wrong at the time the sex crime occurred.

“I didn’t know they were under 18!” isn’t a defense that’s frequently used, but it is possible to leverage the situation into a lesser charge or dismissal altogether.

In Maryland, the age of consent is 16 years, while the federal age of majority is 18 years.

Sex crimes happening between the two ages can fall into a range of situations, including statutory rape laws – with possible “Romeo & Juliet” exceptions for young lovers – or outright child molestation.

Again, it’s all about consent. Is an outraged guardian pursuing these charges when the “victim” was the willing party? If the victim claims they consented, does the law consider them old enough to offer legal consent?

It’s a very tricky situation, and one that’s best left to a seasoned criminal defense attorney with many sex offense trials under their belt to hash out.

Finally, doppelgangers exist. Yes, there are people who look alike and are not related.

During a sex crime, the victim may only see brief glimpses of the suspect’s face. The experience is so traumatic that they may block out details, which leads to a false identification of a suspect.

A defense of mistaken identity ties closely to an innocence defense. Again, an alibi is necessary to show the mistake of identity.

An allegation of a sex crime is serious business. JC Law offers free initial consultations. So, before the charges come find out what can be done and how to keep life moving. We’re here to help in any situation you may find yourself in.