The Weekly Writ: Maryland Legal News You Can Use for August 2, 2021 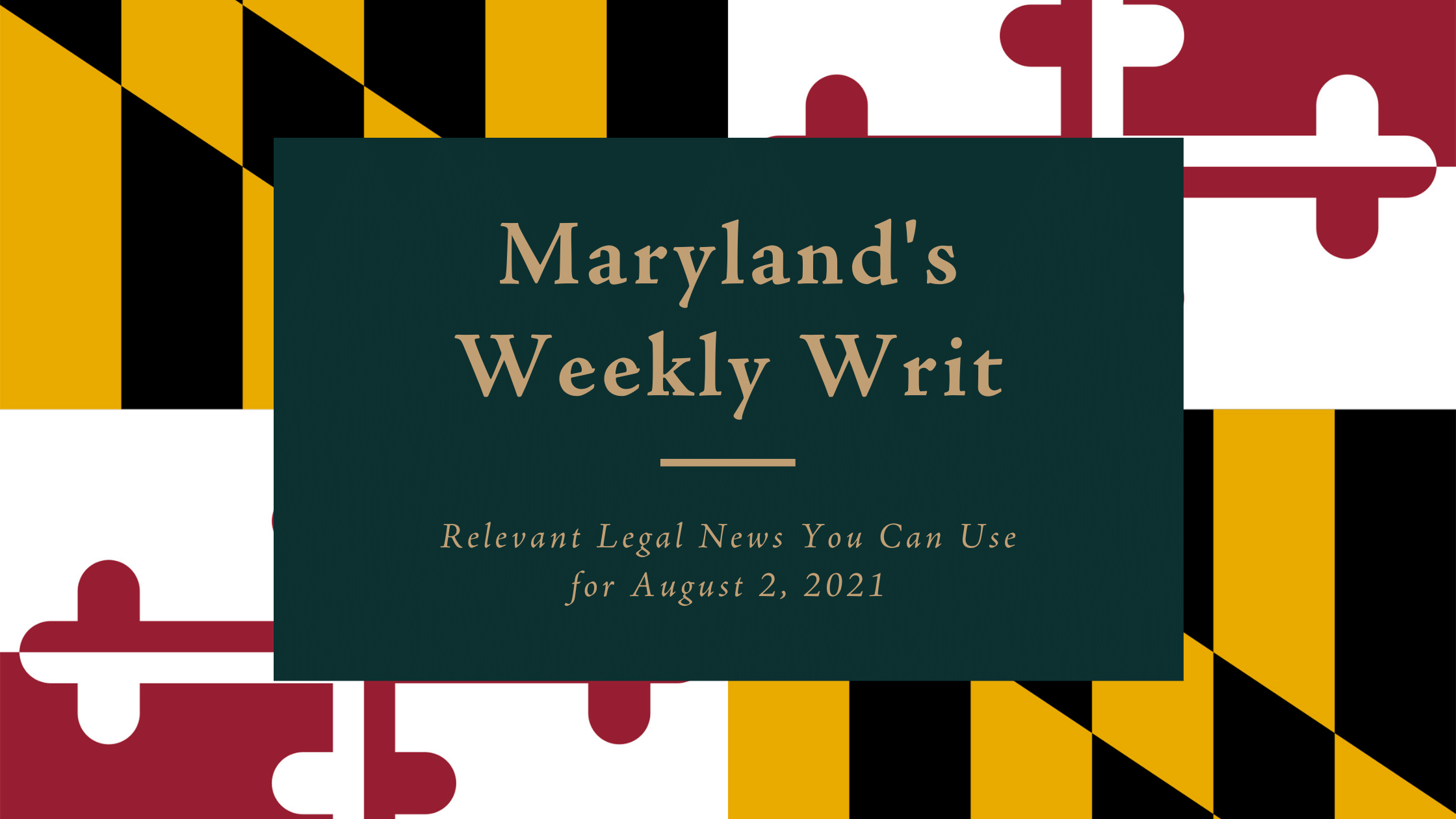 Of course, if these or any other legal questions are impacting you and your family, then don't hesitate to reach out to JC Law for your free initial consultation with one of our expert domestic, criminal, or civil litigation attorneys.

Did You Get Summoned for Jury Duty?

As jury trials have again resumed, so too has the call for jurors. Baltimore Circuit Court alone has a backlog of over 2,000 criminal cases, not to mention the close to 2,000 civil cases that also require juries.

Marylanders can again expect to see jury summons appearing in their mailboxes calling us to our civic duty. If you are a licensed driver, registered voter, or resident of a given city or county, then you are going to receive a summons for jury duty.

Don’t ignore that piece of mail summoning you, it could cost you $1,000 and 60 days in jail. Follow the instructions provided on the summons and show up to court when called to.

It has been a while since those jury summons have hit mailboxes due to the pandemic, but now that the courts are open it feels like everybody is getting one. We as citizens are being called to duty to provide a fair and speedy trial for those accused.

Plus, your job is legally required to let you perform jury duty, although not required to give you paid leave. All courts provide a per diem expense during the time you sit on a jury, whether that be for one day or 100 days.

All three branches of the government require the active role of the citizens to function and operate. Without us, there is no government. Remember it is “We the People…,” not “We the government.”

Essex police made a gruesome discovery during a routine traffic stop last week, when the bodies of two young children were found in the trunk of the car. The driver of the vehicle, the aunt of the the two children, is charged with neglect, failure to report the deaths, disposal of their bodies, and child abuse.

Neither child was reported missing before the discovery of their bodies.

According to law enforcement, the woman drove around for months with the decomposing bodies of the two children in the trunk before they were found.

Truly a tragic story, one that slipped through the cracks of the community. How could no one have noticed the children missing or neglected? As a whole, the community failed in protecting some of its most vulnerable.

Under Maryland law, everyone is responsible for reporting abuse, not just doctors, nurses, or the police. But blame cannot just be placed on the shoulders of the community for not stepping up, as no one else in the family reported the children missing.

Mom, grandma, uncle, cousin, someone should have gone to the police and told them the children had not been seen or heard from in over a year. The aunt accused in this case allegedly bounced around and made it hard to locate her and the kids, so one important red flag was ignored…where are the children?

The medical examiners office discovered the children were severely under weight when they died, so there would have been obvious signs of malnutrition and neglect if anyone physically saw the children before their death.

Someone will face the consequences for the children's deaths, but everyone is partially responsible for failing to protect these children.

Another Marylander Charged with Threats Against a Federal Official

A Greenbelt, Maryland man faces federal charges after allegedly threatening to set Dr. Anthony Fauci, the director of the U.S. National Institute of Allergy and Infectious Diseases, and his family on fire. According to court records, the man sent a total of seven death threats.

The threats came from an encrypted email account between December 2020 and July 2021. The defendant faces up to 10 years in prison for making threats against a federal official, as well as another 5 years for sending interstate communication containing a threat to harm.

What is going on in Maryland? Another man threatening a federal official!? Before President Biden and Vice President Harris were elected a man threatened to kill both and has been sentenced to seven months in prison. Now, this.

The federal government takes threats to any elected official seriously and treats them as though it might happen, so they bring the strong arm down hard.

Kids Return to the Classroom and Parents Back to the Office, So Can You Leave Your Kid Home Alone?

A new school year is around the corner, and with students returning back to the classroom this fall and parents back to the office, there may be times your kids need to be left alone. A part of growing up as a kid is self-care, but each child matures at different rates, so some may be ready before others.

Self-care is either a rewarding or frightening experience, depending on the child’s maturity level. A good sign that they are ready is a desire to stay alone. But, not every kid who says they want to stay at home alone can legally do so.

Maryland law says children under eight-years-old may not be left alone, unsupervised, but rather in the care of someone 13 and older. If left alone under 8, it is technically neglect. Leaving children at home alone requires them to know how to react in certain situations, like knowing how to handle an emergency and who to call in the event of one.

Parents should consider all risk involved when it comes to leaving the kids unattended.

The world is trying to get back to normal and with everyone getting out of the house and back to work and school schedules may not mesh. This requires the use of a sitter, the older kids watching the younger ones, or a child finally staying at home alone for the first time.

Just because a parent leaves a child home alone does not mean they are neglecting them. There’s a whole generation of latch key kids. (I’m talking to you 90s child.) Becoming an independent human being is all apart of maturing and growing up, so the practice is not uncommon.

Child abuse due to neglect in Maryland is defined as the failure to provide the necessary resources for the physical and mental health of a minor that creates a risk of harm. Making sure you kid knows the responsibility of staying home alone and how to handle different situations is providing those necessary life skills, not neglecting them.

Therefore parents, you don’t need to feel bad that you have to leave the kids alone for a few hours before getting home from work. You’re preparing them for the future. It’s not child abuse, just make sure any kid under 8 is supervised by a reliable person who is 13 or older and they know what to do in an emergency.

Harford County residents will continue to enjoy cocktails to go for another two years. Covid-19 changed how businesses had to operate, so in the early days of the pandemic lawmakers decided to allow the carryout and delivery of alcoholic mixed drinks to help struggling restaurants and bars.

Many thought when the executive emergency order from Gov. Larry Hogan was lifted that the service would disappear too, but legislators passed a law allowing local liquor boards the power to authorize to go cocktail service for an additional two years.

The Harford County Liquor Control Board decided that the service will allow bars and restaurants to continue their recovery and get back on their feet.

The pandemic is not over. There is talk of yet another possible emergency order and mandates coming back due to the Delta variant of Covid-19. If lawmakers took the ability for restaurants and bars to operate under these restrictions they’re only doing them a disservice.

These businesses rely on serving customers, so it is paramount that they have the ability to provide their services to survive and keep local economies churning. The service industry as a whole probably would have filed a civil lawsuit against the state as a way to protest and force them to make a change.

That’s the beautiful thing about America, we have the ability to create and change law for our benefit, not to our detriment.

Just don't go taking the phrase "cocktails to go" too literally, cause you could end up with a DUI and needing our services to defend those charges. Stay safe, and wait till you are home to crack the drinks open.