Prenuptial Agreements in Maryland - Protect What’s Yours When It's Over. 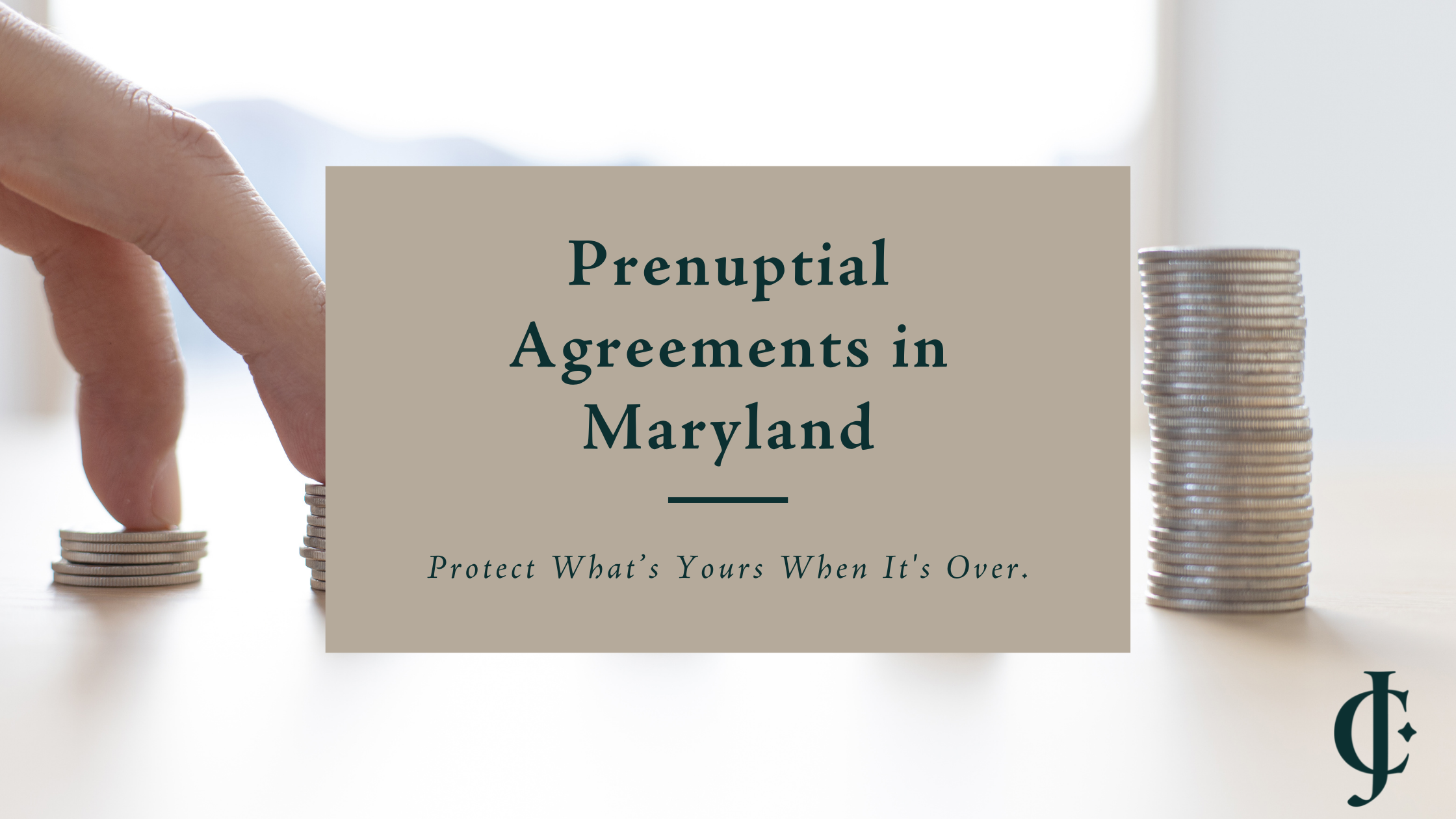 They are binding contracts that can be enforced by law. Prenuptial agreements can provide peace of mind for people before getting married.

Prenuptial agreements are commonly used to protect all kinds of personal assets. They can provide instructions on how retirement and life insurance policies are paid out if one partner passes away. They can also determine how each person can manage personal property sold or bought during the marriage and what happens to those assets if the marriage ends in a divorce.

How Are Prenuptial Agreements Governed in Maryland?

State laws are used to determine the validity of content contained in a prenuptial agreement. Maryland does not have specific statutes for those arrangements as of this writing. All prenuptial contracts fall under contract law at this time.

Certain restrictions regarding prenups exist. They are as follows:

As a general rule of thumb, prenuptial contracts won’t be enforced if a marriage has been voided or annulled. The only exceptions are when legal intervention is required to prevent one party from receiving an unfair advantage over the other party.

What should be included in a prenuptial agreement?

All assets and debts owed by the parties who plan to marry should be included in a prenup. Other items to add are family property, work expectations, expected financial responsibilities in the marriage, and if one or both partners has any children from prior relationships. In addition, inheritances for those children should be clearly spelled out in the agreement.

You do not need to list regular household chores, such as who will make dinner or do the laundry, for example. Instead, you can state which person will pay the bills, prepare taxes and manage money. How credit will be obtained, money will be spent, and present and future investments can be specified here if you prefer.

All prenuptial contracts should be written. People hire a lawyer to draft the document for them. Both parties should read the agreement very carefully before signing.

Prenups are enforceable, even after a couple has been divorced. The agreement must be in writing and have been signed by both parties. Once the couple has been married, the prenuptial agreement will become valid.

Can Prenuptial Agreements Be Challenged?

One or both people in a marriage may challenge a prenup at any time. Although prenuptial agreements are not dismissed very often, that can happen occasionally. Certain conditions must be present before a prenup can be called into question.

Unfairness, undue influence, coercion, fraud, incompetence, duress, or mistakes must exist before a prenuptial agreement can be properly challenged. Some examples of these situations are listed below.

Unfairness: Circumstances may have changed that could render the agreement to be unfair for one party or the other. The terms of the prenup may also be considered biased. In that case, a court of law could determine that the affected party would have had no legal reason to sign the document.

Undue influence: One spouse may have been threatened into signing the agreement. The other spouse may have suggested that certain consequences would be faced if they did not sign the prenup.

Coercion: Coercion uses threats or force to convince someone to do what they want, such as signing a prenuptial contract. Both parties should enter into these arrangements voluntarily. No one should feel like they have to sign or agree to a prenup if they are against it or have reservations with the specific contract.

Fraud: One or both spouses may have willingly under or overrepresented their current asset valuations before getting married. They must truthfully disclose all important details when entering into a prenuptial agreement. If essential information was omitted or misrepresented, the affected person could reasonably claim that the document was fraudulent.

Incompetence: A person’s mental state or capacity should be considered when a prenuptial agreement is drafted. If one partner is deemed to be mentally incapable of understanding the contract, it could legally be declared null and void by a judge. Intoxication and being too young to sign a binding contract are other reasons why prenups can be dismissed due to incompetence.

Duress: Duress is using violence or other types of threats against someone so that they will do something that is usually against their better judgment. If a person feels like the decision to enter into a prenuptial agreement was against their own free will, they have reason to contest the contract if they so choose. The affected party may have been pressured into signing the agreement by their future spouse or other relatives or friends.

Mistakes: Important information may have been entered in error or accidentally excluded from the prenuptial agreement. Common examples of mistakes made in prenups include making unrealistic promises, vague language in the contract, clauses that can’t be enforced or could be considered unreasonable or unfair for one or both parties, and not making the contract official.

Who Can Create A Prenuptial Agreement?

Lawyers can draft prenups as needed. You can also create the document yourself, but it’s a good idea to at least have an attorney present for each party to ensure fairness and that no important information is left to you. You can also have an accountant prepare financial statements for each person who is entering the marriage.

Feel free to contact us for a consultation at no charge. We will be glad to listen to your concerns and help you prepare an agreement that protects your interests. Prenuptial agreements may seem intimidating, but they do not have to be. Our professionals can help you get off to a good start with a proper prenuptial agreement.