Fundamentals in Divorce: Grounds for Separation, Absolute vs limited Divorce 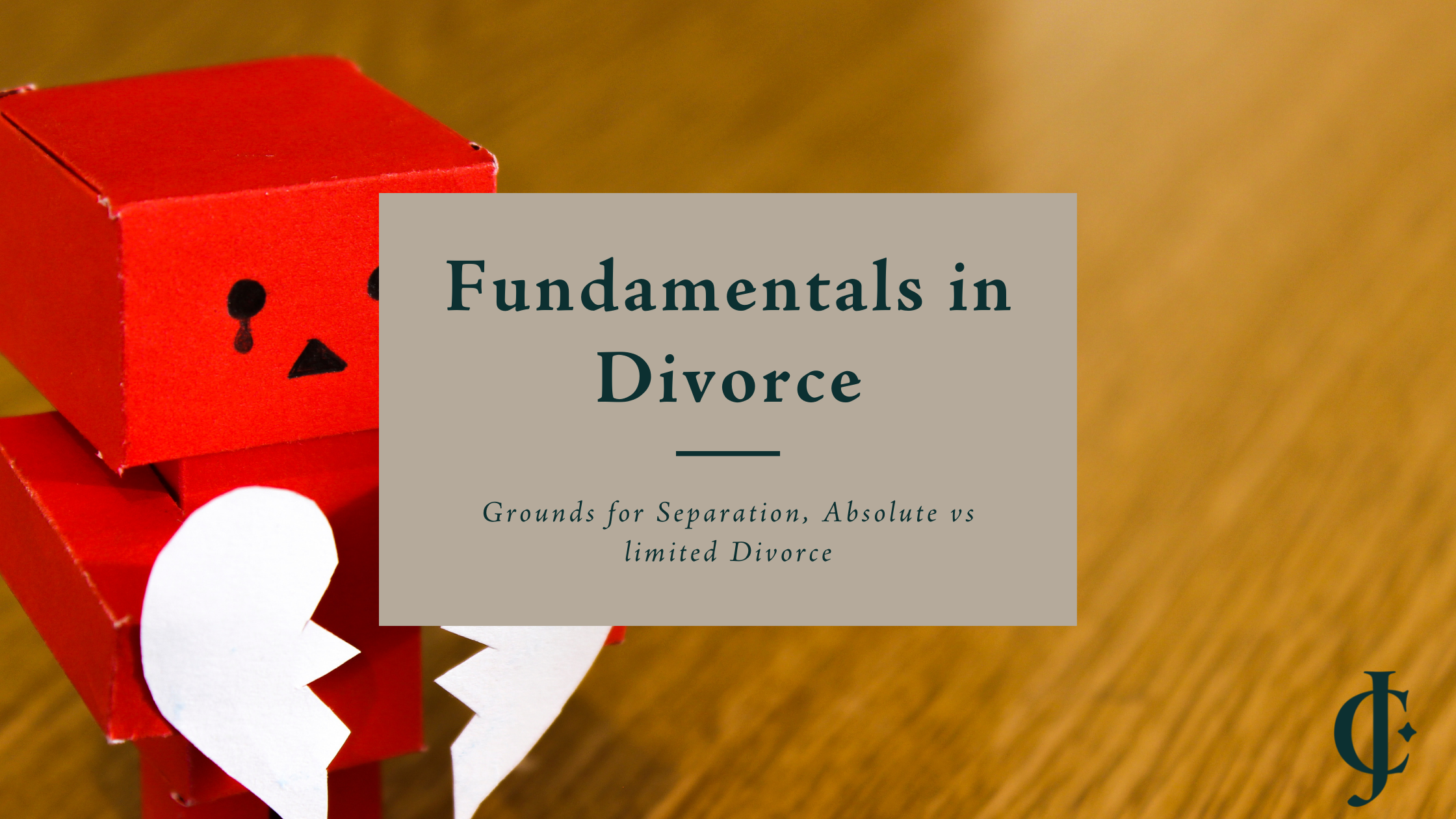 What Are The Current Kinds of Divorce in Maryland?

There are two primary types of divorce that can be filed:

Limited divorce is not the same as separation. Separation is defined by a couple who has decided to live apart for a certain time period (and abstains from sexual intercourse with one another during that time). Maryland does not classify legal separation as of this writing.

No-fault divorce is a kind of absolute divorce that can be filed in Maryland. In this situation, no evidence or allegations of harm or other bad behavior need to be made. One or both spouses can file for a no-fault divorce if they choose.

What Are Grounds For Divorce?

Grounds for limited divorce are desertion, vicious or cruel conduct by one partner, separation, or mutual consent.

Desertion is also known as spouse abandonment. If a spouse deliberately leaves or abandons their partner for a prolonged period of time, it could be considered desertion. There are two types of desertion under the law: actual desertion and constructive desertion.

Actual desertion is when the marital property is abandoned by a spouse without reason. The spouse who is asking for a divorce using these grounds should be able to prove that their partner’s leaving wasn’t justified and that the person who left wanted to end the marriage. They must also verify that cohabitation by both partners has ceased and that there is no possibility of the marriage resuming. The desertion has to have happened for at least 12 months in a row, and the person who was deserted should be able to prove that they didn’t consent to their partner leaving.

Maryland courts define constructive desertion as behavior by one person in a marriage that could cause the continuation of the marriage to be detrimental to their partner’s comfort, self-respect, or their overall health. In this situation, the desertion occurs by the person who was abused instead of the other way around.

All of the required criteria for actual desertion will be considered in constructive desertion divorce requests. In addition, the courts will also factor in other variables, such as any efforts that were made to repair the relationship by the spouse who left, how long the partner who left had to deal with any physical or mental harm, and the time period and nature of the abuse itself. If remaining in the home could further damage the person who deserted the relationship and their children, the courts may grant a divorce for that rationale.

Cruel or vicious conduct can be both mental and physical abuse. Such actions could harm a spouse, parent, child, or other family member living in the home. If it is a repeated pattern of behavior, the spouse and their children may feel unsafe residing at their current residence.

These conditions must be proven before they can be used as a reason for seeking a divorce. The behavior by your former partner may have negatively impacted you in some way. It could also be so cruel that it is no longer acceptable or safe to live with that person.

Separation is when married partners decide to live in different domiciles. One spouse could keep their current home while the other lives with family, rents an apartment, or buys another house. This separation must have been for at least 12 consecutive months.

Separated partners can no longer be intimate with one another. Separation for a year or longer could be a valid reason for seeking an absolute no-fault divorce.

Grounds for absolute divorce are adultery, insanity if one party is convicted of a crime, or mutual consent.

Adultery is one of the main reasons why many married couples decide to get divorced. Therefore, infidelity is a major concern. It’s also a misdemeanor offense in the state of Maryland. However, state law doesn’t exactly define adultery, and there are very few adultery cases that are ever prosecuted. It’s punishable by a maximum fine of $10.

There isn’t a minimum or maximum time period for adultery as a reason for divorce. Adultery claims may even result in divorces being granted almost immediately. If the case is tried in court, all the claimant needs to do is to be able to prove that their former partner had both the opportunity and the disposition for sexual intercourse with another person outside of the marriage.

Proof can be provided by emails, text messages, photos, videos, and other similar sources. Another example would be a child born to a person that the offender is not currently married to.

Insanity is a common defense plea in many defense cases. Defendants plead insanity, stating that they were unaware of their actions or had no idea what the consequences would be for those acts.

Incurable and permanent insanity can be used as a reason for filing for an absolute divorce. To do so, the applicant must be able to prove that their spouse has been sent to a hospital or mental institution for a minimum of three years before the divorce filing was made. They should also have documentation from at least two certified psychiatric physicians who can confirm that their insanity cannot be cured. Another requirement is that one or both parties must have been a Maryland resident for two years or more before the divorce was filed with the proper authorities.

Conviction must also be proved. The conviction could be in any state in the union. The person who was jailed must have served at least 12 consecutive months in prison and was given a jail sentence for a minimum of three years.

Mutual consent is when both persons in a marriage decide to end their relationship. It’s time for them to move on and leave the past behind. If both parties mutually agree to divorce, they should be able to prove in a court of law that they still want a divorce after the settlement agreement was signed and before the divorce hearing, and that they have a signed settlement agreement that explains who will be responsible for alimony and any property concerns. If the couple has children, an agreement regarding child support, access to parenting, and child care must also be drafted and signed by both parties.

How Can I File For Divorce?

One or both partners in a marriage may file for divorce in Maryland if at least one of them is a state resident. If the reasons for divorce happened outside of the state, one partner must have lived in Maryland for six months at the minimum.

You can file for divorce by yourself, or you can consult the services of an attorney. If you are thinking about divorce, do not hesitate to contact us for a no-obligation consultation. We can help you examine your options and find the best solution for you.

Divorce can be painful. It’s never easy to end a marriage. You may still have feelings for your former partner, and it will undoubtedly change your relationships with your children, relatives, and other important people in your life. No matter what happens, think about why you want to get a divorce. Making yourself and your loved ones a top priority can help you see and understand the overall goal.